The West Point Library Foundation is a non-profit corporation established to accept gifts and bequests to further the services of the John A. Stahl Library.

The John A. Stahl Library Board meets on the fourth Monday of the month at 5 p.m. in the library’s meeting room. Board members are appointed by the mayor to serve a three year term.

Great Seal of the United States of America

Prominently displayed in the Library is a piece of art that is graciously being shared by the Aelredand Rosie Hugo family. This Seal of the USA is crafted using common items that are found in hardware stores.

Al Hugo, a local plumber, was on a service call at a local store sixty or seventy years ago. Upon entering the flooded basement, he saw the Great Seal of the United States partially covered in water. Al recognized it as something special and felt sad that it was getting ruined. He went back upstairs to tell the owner what he found and how the object was “one of a kind.” The owner told Al that if he wanted to preserve it, he could have it. Al took it home and started to salvage it. Later on, Al learned that the owners of Kerl’s Hardware and Jewelry Store had won it as a giveaway prize at a national hardware convention.

The John A. Stahl Library is fortunate that the Hugo Family chose this public building to display this very unique impressive piece of art. On Temporary Loan from the Aelred and Rosie Hugo Library 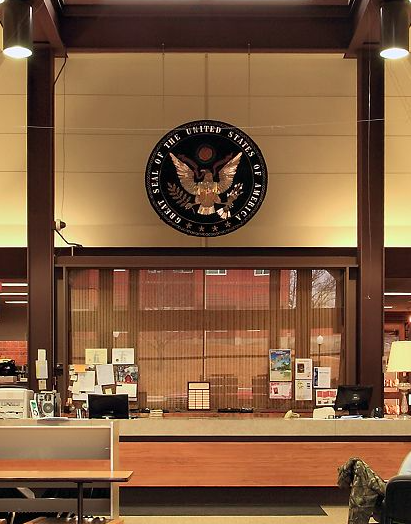